hairyblue said:
I'm surprised that the humans don't like the elves all that much. Is it because they are "foreigners"?
Click to expand...

Rob Helmerichs said:
Not just foreigners...superior (immortal, for one thing, and judging from their fighting abilities, super-powered by human standards) foreigners who are there to watch over them from their mountaintop castle and make sure they don't misbehave.
Click to expand...

Story indicated that the humans being watched over (their ancestors, anyway) had sided with the dark side, as it were, in the previous wars. Humans more than a little annoyed at still being monitored so many years later. (What was it, hundreds of years? A few thousand?)


astrohip said:
I liked it. I know some are saying it moved slowly, but I liked the pacing. There's lots of story to tell, and I'm here for the journey.
Click to expand...

Concur. I really enjoyed the first couple episodes, though perhaps owing to only bare familiarity with the original text. I have no basis for critiquing the show for variance from the source. My viewing experience was likely also colored by having watched the first few episodes of the new Thrones series, previously; Rings of Power seemed downright Michael Bay-inspired, comparatively.

cheesesteak said:
For now, I'm assuming the Stranger is Gandolf but I wouldn't be surprised if it's Radagast. A total guess on my part.
Click to expand...

Yeah, seems obvious he's a wizard, but could be any of them. Though... the series has already linked to the Jackson movies by centering on Galadriel and Elrond, so it could easily be Gandalf -- especially given his landing among the Harfoots.

jsmeeker said:
When does all the walking start?
Click to expand...

morac said:
The series and the movies are completely separate other than they are both based on the books. The series doesn’t have the rights to reference the movies directly.
Click to expand...

Thinking of it more from a viewer's perspective. Centering on characters familiar to the viewer from the movies will facilitate pulling the viewers into this story. (Whether or not those same characters are being portrayed accurately relative to the source material is another matter.)

Rob Helmerichs said:
I believe it's based on the appendices from Lord of the Rings.
Click to expand...

That's what this article says. 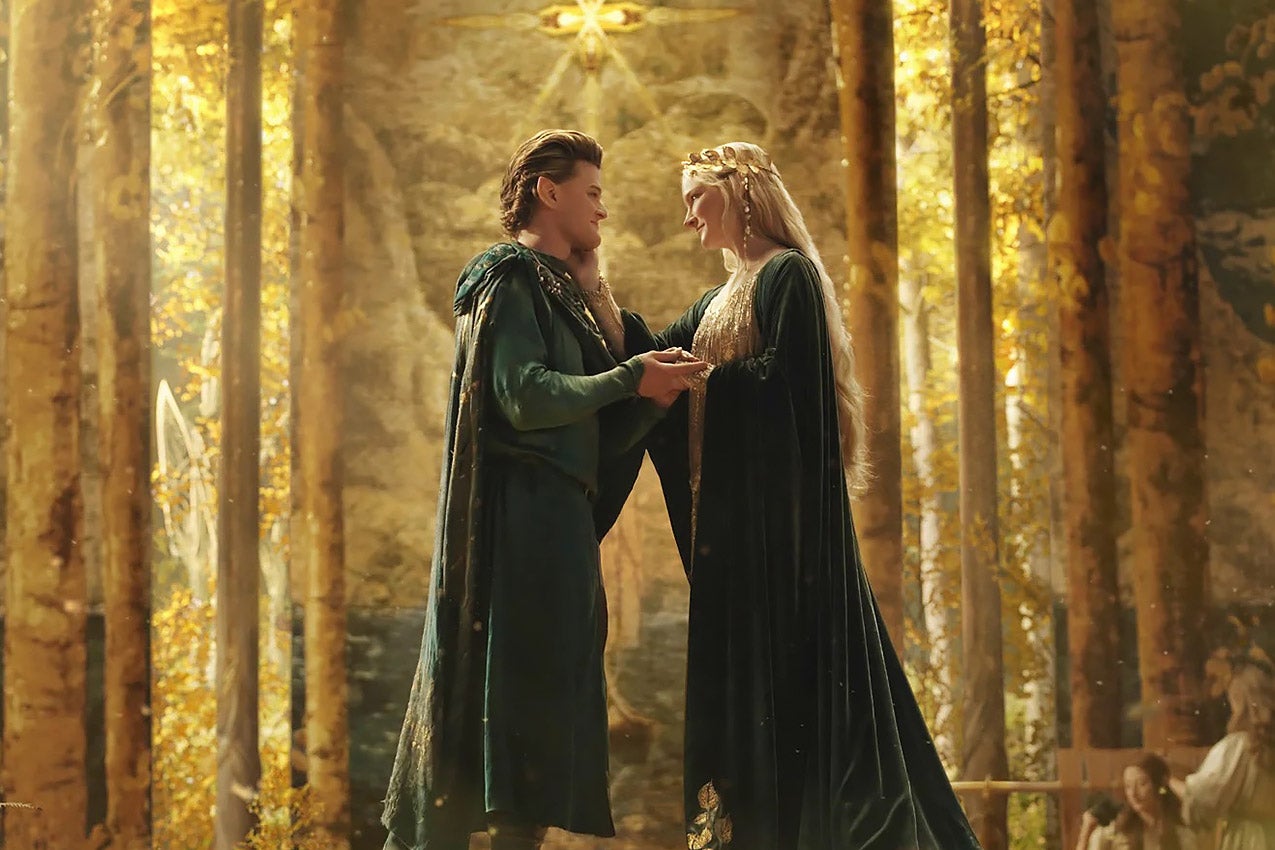 The Rings of Power beautifully captures the look of Middle-earth, but its structure and tropes come from other lands.

showrunners Patrick McKay and John D. Payne didn’t even have The Silmarillion or other posthumously-published Tolkien writings to draw from. Instead, since Amazon only owns the TV rights to The Hobbit and The Lord of the Rings, the production is based on the appendices to the latter.
Click to expand...

Stormspace said:
yet Elrond tired, or quit, when breaking rocks.
Click to expand...

Or he took a dive. What would have been gained by defeating Durin in the endurance contest?

Given the discussion between Prince Durin and his king/father near the end of episode 2, Celebrimbor isn’t the lone dupe.

DevdogAZ said:
I just wasn't sure if there was some magical reason why they had to leave and which now only allows certain of them to return.
Click to expand...

IIRC, the story indicated that they left Valinor to hunt/fight the baddies; but this makes one wonder why they're not ALL going home when the Big Elf holds the ceremony honoring Galadriel and her crew for showing that all traces had been eliminated.

Rob Helmerichs said:
Well, the Big Elf is lying...he knows full well that all traces have not been eliminated.

Not sure how he's selling staying behind to the others, though...
Click to expand...

Exactly. Seems a flaw in his pitch.

· TDL shepherd
Joined Nov 25, 2003
·
17,863 Posts
More a question for the Middle Earth experts… the show seems to be emphasing “The Stranger’s” affinity with fire,
which was kinda Gandalf’s speciality. But I thought that was partly due to him sporting one of the 3 Elven rings of power, the one associated with fire — though he wouldn’t acquire it until later in the timeline relative to his arrival via The Fireball Express. (Galadriel held another, and Elrond the third; right?)

cheesesteak said:
The name "Isildur" kept ringing a bell so I had to look it up.
Click to expand...

The rapid increase in characters has been the bane of my viewing experience.

cheesesteak said:
I hope the mysterious stranger figures out his wizard properties soon because the Harfoot subplot is pretty snooze worthy compared to the other subplots.
Click to expand...

Yeah, seems a bit of a pander to the LotR/Hobbit film crowd, wanting to keep hobbits(ish) in the narrative.

cheesesteak said:
Have orcs always been hurt by sunlight?
Click to expand...

I don’t know about the near-vampiric nature of the sun burning them, I’d always taken it as them feeling more powerful in the dark and demoralized/cowardly in the light.

We did, in Episode 1.
… in one of the shots tracking The Stranger’s fireball.

DevdogAZ said:
I think the Queen saw the leaves falling and realized this was what she saw in her dream, and that if she sent Galadriel away her kingdom would be destroyed. So she called her back, but it wasn't shown to us so that it could be dramatically revealed in that meeting.
Click to expand...

I thought there was some concurrent voiceover explaining that the falling leaves could be interpreted as “tears of the Valar,” those who’d gifted them Numenor … and the leaves falling (tears) were interpreted as their displeasure at Galadriel being sent away and Numenor failing to aid in the fight against Sauron.

edit: What I don’t get is how there’d be any leaves left on the trees given how many had fallen.

cheesesteak said:
Why hide the fact that the deposed king is deathly ill?
Click to expand...

Yeah, I didn’t grok the reasoning for that on a single viewing.

cheesesteak said:
I'm curious how Galdriel and the Numenorians knew where to go to save the townsfolk.
Click to expand...

Earlier episode had someone say that Orcs(?) were heading towards Ostirith, right?

zalusky said:
IMDB is giving the show in the low 7s
Click to expand...

IMDB isn’t “giving” anything, is it? On what are those ratings based?

morac said:
I would normally assume Isildur is dead having been in a burning building when it collapsed, but considering Adar survived having a watch tower dropped on him, I’m sure Isildur is fine.
Click to expand...

Re: Isildur health … Horse scene was tell that Isildur is fine. Horse wouldn’t be dragged away back to Numenor, sensing that Isildur needs him.

cheesesteak said:
My guess is that Isildur survived since his mind reading horse ran back towards the destroyed town.
Click to expand...